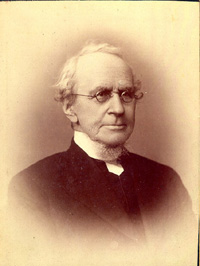 To complete the view now taken of the churchly spirit of the Heidelberg Catechism, as illustrated in these connections and tendencies, it remains only to notice briefly the theory of religion, on which its whole meaning and use are found to be constructed. This assumes throughout, that the Church is, in a certain sense, the medium and bearer of spiritual life, for her own children; that‹ whilst religion is a pre-eminently individual and subjective interest in one view, it is still, in another, conditioned and upheld, like all life, by an objective ground that lies without and beyond its particular subject altogether. The children of believing parents have a right to baptism; by this holy sacrament, they are translated from the world over into the Church, and have a real title thus to all the grace of the new covenant; it is the duty of parents to believe this, and to train them up in the same faith; which in such case is itself the christian consciousness, while the want of it is baptismal infidelity; all the appliances of christian education are to be employed to form them to a pious and holy life, with the confidence that what is thus done for them in the Church and through the Church, (the family being in this case but a part of the church system) carries along with it a truly divine force; at the proper season, they must be handed over to the Church, to be prepared by catechetical discipline for the other great sacrament; and finally, thus prepared, they must be introduced to all the privileges of their church state, that they may grow up from this point onward, by proper use of the means of grace, to f the stature of full manhood in Christ. Right or wrong, this is the theory of the Catechism; as it was the theory indeed of the whole Church in the sixteenth century – unless we choose to include under this name, the fanaticism of the Anabaptists, and other demonstrations of a kindred kind. Religion, according to this view, is something that rests in the general life of the Church; capable of organic transmission; not by blood, nor by the force of mere natural example and teaching; but by the Order of grace, as a divine, historical constitution in the Church itself, including resources, living capacities and powers, in its own being, for this very purpose. Men may refuse to believe all this, and act accordingly; but that only shows their natnral infidelity for all the realness of Christianity. Faith in a life-bearing Church, comes to the same thing at last with faith in a life-giving Christ; for the Church is the Body of Christ, the fulness of Him that filleth all in all.

The Catechism proceeds throughout on this theory of baptismal, educational religion. It is formed for the baptized children and youth of the Church; who are received and addressed, not as aliens and foreigners from the household of faith, but as church members; who have a full right to all the blessings of the covenant, in this character; and who are now to be prepared for a personal approach accordingly, to the sacra., mental altar. The catechumen, in this view, is addressed from the very start, as a christian: »What is thy only comfort in life and death?« And the answer put into his mouth, is taken in full again from the christian stands‹ point, and no other. I belong to Christ, he is taught to say, in soul and body; he is my Savior; hath fully satisfied for my sins, and delivered me from the devil; preserves me; assures me of eternal life. So also onward to the end. The Creed, with its glorious contents, is not for another simply, but for the catechumen himself. All is personal, practical, possessional. »Why art thou called a Christian ?« it is asked; (Ques. 32,) and the answer is at once ready: »Because I am a member of Christ by faith, and thus am partaker of his anointing; that so I may confess his name, and present myself a living sacrifice to him; and that with a free and good conscience, I may fight against sin and Satan, in this life; and afterwards reign with him eternally, over all creatures.«

But is it not dangerous, it may be asked, to put such language into the mouths of young persons, who may be still unconverted, and enemies in fact to the grace of the gospel? Would it not be wiser and safer to teach what Christianity is in itself, without encouraging them in this way to lay claim to it for themselves ? A plausible suggestion certainly; which however it is not necessary now to answer in full. Our concern here is simply with the fact, that the Catechism goes upon this method. We must add at the same time, that in doing so the Catechism does but follow the general practice of the holy catholic Church, from the beginning; which has always considered her children sacred to God by baptism, and felt it her duty to train them from childhood into this same consciousness. Hence she puts the Creed into their mouth from childhood itself; repeating it with them and before them; not waiting till they can j understand and approve it fully for themselves; but, seeking rather, with maternal interest, to breathe it into them as a portion of her own life; that they may grow up into it, and be filled with the power of it, in all subsequent time. In all this too there is much sound philosophy, as well as sound religion; for faith is life, and it is by life only, and not at all by mere doctrine, that it can ever be exerted in the soul. The Creed subsists properly in the life of the Church. Baptism inserts the infant into this life, objectively considered; and gives him a full right to claim it as his own; and makes it proper and necessary, that he should be engaged to lisp himself into it subjectively also, from the very sides of the cradle. If the Church be dead, this theory, held only as a theory, may easily run into practical abuse; and if the Church, whether dead or alive, have no faith in her own divine constitution, the proper fruits of the system cannot be expected of course to appear. But all this is of no force against the system itself, under its true form.

The Catechism owns this churchly process of making christians. It is not general religious instruction which it proposes, in the case of the young. The very thing it designs, is to prepare them for an open personal profession of their faith, and an approach to the Lord’s Supper, at a certain given time. The catechumens are candidates for Confirmation. All looks openly to its proper end, in this rite. Confirmation is no sacrament of course; but it is a beautifully significant ordinance, in which the sacrament of baptism may be said to come finally to its natural and necessary completion. Baptism becomes complete, only in the personal assumption of its vows on the, part of its subject; this calls for some rite; and it is certainly hard to conceive of any more appropriate in itself, or less open to the charge of superstition, than the scriptural ceremony which the Church has in fact employed, from the earliest time, for this purpose. Confirmation and the old Catechetical System go properly together.